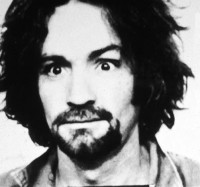 Tonight (Sept. 7th, 2009) the History Channel will take us back about 40 years to one of the most unforgettable moments in American history when he unleashed members of his anti-society army to cause fear into the public with thoughts of starting a race war. As twisted as it sounds, Charlie was able to convince his ‘followers’ to carry out these terrible deeds in the name of  white power.

The book documenting the events and subsequent trial, Helter Skelter, is still one of the spookiest books i’ve ever read. The sheer audacity of random killings of such a nature caused me to get up and lock the doors while reading. If you haven’t read it then I suggest picking it up.

Tonight’s presentation ratchets up the creep factor with one of the original participants, Linda Kasabian, recounting the details of those two fateful nights. Linda was the driver in at least one of the murders (Sharon Tate and friends) and was a the prized witness for the prosecution.

Linda takes us back 40 years to understand fully the mindset of the Manson Family and their quest to create a race war in America by committing these heinous crimes and conjuring up the blame on the black community. Obviously Linda has aged and has come out of hiding to tell this gripping story to a new generation.